Chennai summer – which begins in March 🙂 – is still roasting us, but that also means that mangoes are available in plenty. This year also I received mangoes from my neighbours. I was looking for new recipes as I had exhausted my family recipes. I found this interesting recipe for mango chutney in the 1,000 Indian Recipe Cookbook. I was fascinated by the use of onion seeds (kalonji in Hindi) – we don’t use these in Tamil Nadu. When I first tried out this recipe, I found that the flavour of cumin and onion seeds dominated the chutney so much that we could eat it only with curd rice. I have reduced the amounts by half to one-eighth to suit our palate. Though the chutney is spicy, the amount of sugar used masks the strong spicy flavour. This chutney is ideally suited as an accompaniment to Chicken Biriyani, Tomato Biriyani, and Turkey Biriyani. 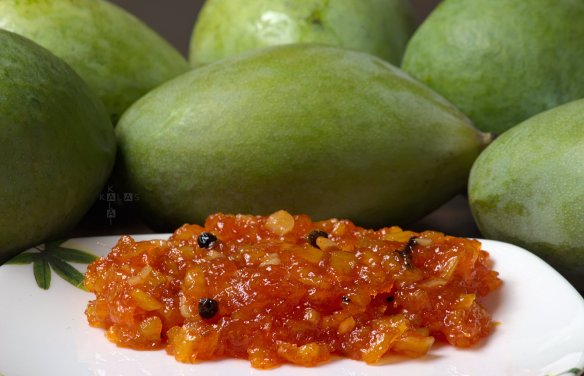 END_OF_DOCUMENT_TOKEN_TO_BE_REPLACED

I found this dish in my mother’s recipe book, which she had copied from her grandmother’s. I do not know if this dish is actually made in Calcutta 🙂 My great-grandmother hailed from Thanjavur, and her family were closely related to Vedanayagam Sastriar who was a Samasthana Kavignar (court poet) during King Serfoji II’s reign. I assume this recipe would have come through the court’s cooks as she was unlikely to have come across a Calcutta dish through other channels. It is very easy to prepare. My great-grandmother made this dish with mutton, but I tried it with chicken and found it to be vastly superior to the mutton version. This can be served with Khamiri Roti or Pooris.

END_OF_DOCUMENT_TOKEN_TO_BE_REPLACED

During the 80s, unsold books from Western countries used to be exported to India as waste paper and sold here as books at throwaway prices. I picked up The Cookie Cookbook by Evelyne Johnson in one such sale for just Rs. 6. It’s a tiny book, called a Dell Purse Book, and I forgot I had it until I discovered it amongst my books 30 years later. This book has a recipe called Mrs. Graham’s Honey Dough which disappointed me with its flavour and texture. A year later I tried the recipe again, modifying it to improve its taste and mouth feel. I increased the eggs and honey in the recipe, which improved both the flavour and appearance and imparted a cake-like texture to the cookies. These cookies have a very soft texture and can be served to the elderly who face difficulty in chewing, as well as to toddlers. Because they are soft, crumbs do not fly, reducing post-consumption cleanup time 🙂

END_OF_DOCUMENT_TOKEN_TO_BE_REPLACED

I believe in using my culinary equipment as often as possible. I therefore like to experiment and create different kinds of kuzhippaniaram (fritters) to make use of the kuzhippaniaram mould. I have already given recipes for Kuzhippaniaram with dosai batter and All Wheat Kuzhippaniaram without dosai batter. I have always wanted to combine cheese with the milk and egg batter and make fritters without deep frying to arrive at a high protein, low fat snack. This is a western kuzhippaniaram as I have used oregano seasoning for flavouring. I would have liked to use dry garlic powder, but it is not easily available in Chennai and has a poor shelf life even if it is, so I have used fresh garlic in the preparation.